Why NADRA Announces To Reserve Fridays For Women 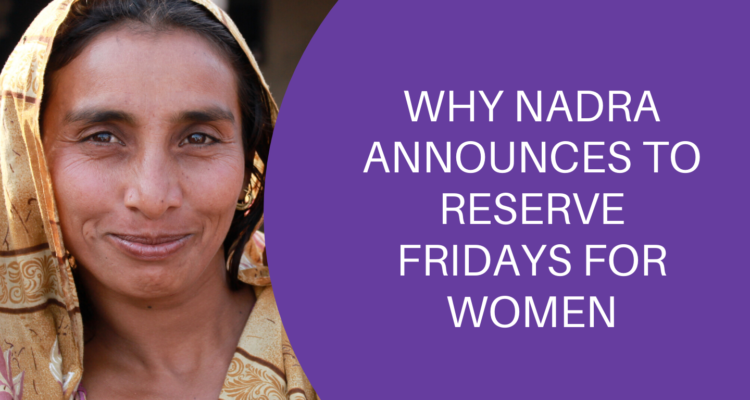 Connecting Pakistan on December 1, 2019 No Comments

Recently on 19 November National database and registration Authority announces to serve women only on Fridays. According to different media’s this decision was taken by the Government to facilitate the people and for public welfare, after the steps taken by different ministries and departments of Pakistan.

Another reason for the decision according to the reports is that Prime Minister Imran khan ordered to take different initiative programs for the welfare of the people of the country. There are almost 64 different programs launched for the purpose.

The questions to debate on

After the news of this step spread across different Media, there were many questions aroused. First of all the point of conflict was that why this decision was taken when women in Pakistan protest in the name of “Aurat March” for equal rights? When they want no gender discrimination and raise their voices for equal status in society. On the other hand, there is also a question that when there are separate counters for women to serve, then why it was needed to take this step?

There were also some questions raised from the men side about the news, that why there is gender discrimination for the men also, why women are getting preferential treatment in public offices? When they ask for equal treatment, like men as they protest for equal rights?

These were some of the questions I read on ProPakistani blog post when I read the news there, rose by some readers.

The motive of the decision

Certainly, the motive of the decisions was taken from a wrong perspective by the readers. There is no connection between the Aurat March protest and this decision. There were certainly other reasons for this decision.

Most of the population of Pakistan is from rural areas and there is still an issue for the registration of women voters. Women in rural areas are still reluctant to apply for CNIC. Secretary of election commission of Pakistan has also said on Friday that there were still 12 million women voters who were not registered. Therefore this effort was done only to improve women’s mobility to approach the dedicated centers. ECP and NADRA didn’t only announce this news to increase women registration for votes. They said that the initiative was also taken to support women to get an education, avail health, employment, and other facilities.

Share your views about the decision. Was it really helps to improve the lives of common people? Do tell us in the comments section.