14 Most Significant Events of Pakistan occurred In 2019 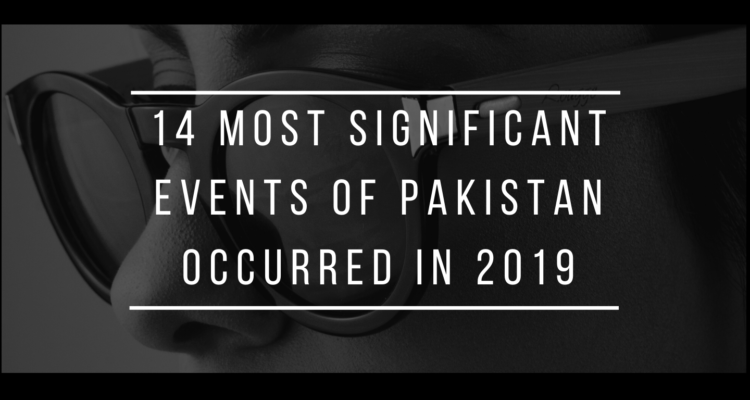 The year 2019 is about to end with all its glory days and nights. This year same we faced some of the major events which somehow should not be happened. But the fact is that how much we avoid these types of incidents, still these took place every year. The point to know here is that we should not forget such incidents and learn from these, so such events won’t occur in the future. Sometimes such type of events influences people’s life seriously.

Here is a list of events occurred this year!

This accident took the lives of 26 people when a bus burst out into fire after the collision. The bus caught fire because it collided with an oil tanker. According to the reports around 40 people were traveling in the bus out of which 27 died and 16 got injured. A joint investigation team was established to inspect the causes of the crash.

In June 2019 authorities discovered that there is an outbreak of Human Immunodeficiency Virus (HIV) in Larkana, district of Sindh. About 27000 people were screened for the test and there were 751 people came upon with HIV positive.  More than 650 HIV infected were children. Since the beginning of the outbreak, major victims were children as the screening tests showed. From these cases of 751, only 43% were getting the ART treatment because of insufficient stock in the country.

This was another major break out in the country. This outbreak infected the life of many and almost 47 people died because of Dengue fever. This eruption was not reported in one province of the country, in fact, there were thousands of people infected in all provinces including Islamabad capital territory and Azad Jammu and Kashmir (AJK).  Since the beginning of the eruption in July 2019 to November 2019, there were around 47,120 cases reported by the authorities. Out of these 47,120 cases, 75 people died because of Dengue fever in different areas of the province of Punjab, Balochistan, KPK, Islamabad Capital Territory and AJK.

Flooding caused major devastation again in the country, especially in Karachi. The country witnessed a major flooding disaster and urban flooding in Sindh province. Around 17 people died in the monsoon season, reported by the Karachi officials. Due to different rain spell in summer, large areas of Karachi went underwater. The deaths were caused by electrocution and roof collapse.

Pakistan and India are constantly engaged in a war across the de facto border in Kashmir. Tension remained across the line of control and escalated overtime when an Indian aircraft launched an airstrike. Pakistan Government rejected the baseless claims of the strikes and condemned the airstrikes because that is the violation of international laws. Indians continued to violate the Kashmir LOC and pushes the militants to the verge of war.

Sahiwal killing was also the deadliest incident of the year. In this accident, a couple with their daughter and neighbor were in Suzuki Alto on a highway near Sahiwal city on their way to a wedding ceremony. They shot down by the Punjab Counter-Terrorism Department (CTD). The CTD personnel stopped the car on the GT road and opened fire on them. Later the CTD claimed that they encountered the victims in suspect of terrorists and alleged that a hand grenade, rifle, and suicide jackets were found from the scene. But the victim’s family argued that they were going to a wedding ceremony when the policy encountered them.

On 27 February Pakistan Air force started an airstrike in Indian occupied Kashmir.PAF conducted almost six strikes in response to Balakot strikes from the Indian army just a day before 26 February. In these airstrikes, PAF shot down two Indian jets and caught one of its Indian pilots.

In this train crash accident at least 21 people killed and there were more than 100 people got injured. According to the reports, Akbar expresses encountered with the deadliest crash when traveling from Lahore to Quetta. The accident took place near Sadiqabad  Rahim yar khan district. A substantial amount of damages were witnessed as the rescue teams and local people came to rescue the operation.

On 24 September in Pakistan’s administered Kashmir a 5.8 magnitude earth quack was felt. The disaster caused serious damages to Mir Pur District. 40 people were killed and 850 got injured in the devastation. 135 houses were damaged only in Mir Pur District of Kashmir.

This was one of the deadliest causality in the history of Pakistan. It took the lives of more than 75 people when the accident occurred. It was reported that many people died while trying to escape from the fire and jumped off the train.  The train Tezgam Express was traveling to Rawalpindi from Karachi. The fire broke out on the train when it was on its way in Rahim yar khan.

Azadi March of Molana Fazul Rehman started in October is still going on in the country. The reason behind this Azadi March was to take resignation from Prime Minister Imran khan and conduction of new elections. Initially, the March was started on 27 October and later called off on 19 November with Plan B of the protest.  In Plan B it was decided to block main highways and major roads in the country for protest against the government.

In the Norwal District of Pakistan Gurdwara Darbar Sahib is the holiest site of Sikh Pilgrims in Pakistan. The historic opening ceremony was held in November, inaugurated by PM Imran khan. Kartarpua corridor is a secure visa-free border between Pakistan and India. This agreement allows Indian Sikhs to visit their holy place without a visa from the Indian –Pakistan border.