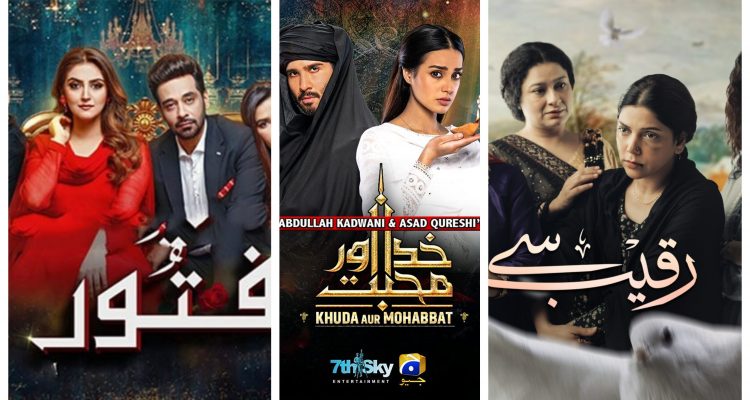 Connecting Pakistan on September 16, 2021 No Comments

Pakistani dramas are known for their simplicity and beauty. All the credit for this beautiful drama goes to the authors, directors, supporting teams, and the star cast and their supporting actors. Here we have a list of the top 5 most popular Pakistani dramas of 2021 that you must watch. These drama serials are already on air.

While all the entertainment channels are working hard to create good content for the viewers, some of them are quite remarkable. So, here we have the details and list of the most trending dramas of today.

The list of Pakistan’s top 5 best dramas is Khuda Aur Mohabbat Season 3, Raqs-e-Bismil, Qayamat, and Pehli Si Muhabbat. These plays have values ​​of repetition, famous characters, a coherent story from beginning to end, great production, and a great director.

Khuda Aur Mohabbat Season 3 is one of the 5 most popular Pakistani dramas of 2021. The drama is full of true love, romance, emotion and excitement. The drama is produced by Asad Qureshi and Abdullah Kadwani under 7th Sky Entertainment. Its stars casts are Feroze Khan, Iqra Aziz, Junaid Khan, Tooba Saddiqui, Noor ul Hassan, Rubina Ashraf and Usmaan Peerzada in lead roles. Feroz will play the role of a confident middle-class young man who falls in love with the richest royal girl.

This is the third season of one of the popular dramas of Khuda Aur Mohabbat. The story is the same but differently designed for a completely new experience for the viewer. Watch it every Friday at 08:00 pm on Geo TV. The original soundtrack for the third season of Khuda Aur Mohabbat was released on January 29, 2021. The OST is sung by Rahat Fateh Ali Khan. The drama OST has over 100 million views on YouTube.

Parizaad is the latest Pakistani super hit tv drama series that is aired by Hum tv on 20 July 2021. The drama is directed by Shahzad Kashmiri under MD production and based on the novel of Hashim Nadeem. Its stars cast are Ahmed Ali Akbar, Yumna Zaidi in leading roles with Ushna Shah, Nauman Ijaz, Urwa Hocane, Saboor Aly and Mashal Khan on prominent roles.

The Drama story revolves around Parizaad, who was born and raised in a poor family, is always ridiculed for his dark skin color. But his romance is always rejected because of his physical appearance and financial status.

Raqeeb Se (A Love Story You Can Never Forget) is like a classical love story-based Pakistani drama serial that introduces some legendary actors into strong characters that are unforgettable. The drama is directed by Kashif Nisar and produced by Momina Duraid under MD Productions banners. Its stars cast are Hadiqa Kiani, Noman Ejaz, Sania Saeed, Iqra Aziz and Faryal Mehmood in leading roles.

The story of the play is excellent and full of emotion. This is a very complex love story. There is so much to show in this love story so keep watching. The drama is aired on Hum TV from 20 January 2021.

The story of the play tells a love story that is above all, as the lover forgets the worries of the past and the uncertainty of the future. Hamza and Dilnasheen are in love, but the advent of past love complicates matters.

Pehli Si Muhabbat is a one-sided love story that will hold you to the end of each scene. The drama is directed by Anjum Shahzad and produced under IDream Entertainment that is aired by ARY digital on February 27, 2021. The drama star casts are Maya Ali, Sheheryar Munawar, and Hassan Sheheryar Yasin in the leads role.

The story revolves around how loving birds face the most difficult conditions of their lives together. It is a strong game of expression and how to make the impossible possible by fighting bravely in every way.