Throwback To Major Events Happened In The World In 2019 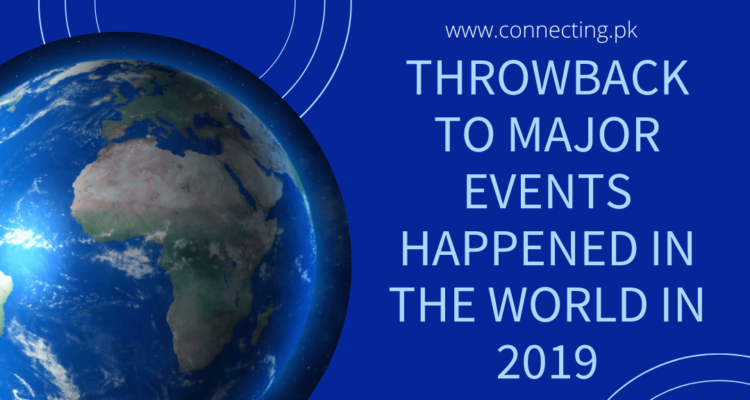 The year 2019 is a few days more to go now. We are moving ahead to the year 2020. With all its glory some of us have a very difficult year and on contrary to this, it was the busiest year for others. We came across some of the big events every year whether they are from men made or some natural force caused them.

1. The most diverse class of lawmakers in history was sworn into Congress. In the 116th conference, women made history in congress. This year most of the women made history in elections including Muslim women who will govern the congress nationwide in the US. This success deserves to be celebrated as this would be the first-ever year when most of the women governors are in the United States. 117 women got elected to the US office having one Native American woman and one Muslim American woman.

2. Sandra oh honored her family which melted the heart of many. She won for the award for”killing me” which made her bowed to her parents on the stage.

3. A judge issued a decision against Trump’s ruling of birth control mandate. The judge didn’t stop Trump’s policy but partially declared that women still have affordable access to birth control.

4. Little Star Marsai Martin is a 14-year-old girl. She is the youngest executive film producer in Hollywood. She is also known as black girl magic. Her movie “Little” hit the theaters in spring 2019.

5. Lori Lightfoot won the race of Mayor and became the first black women gay leader in Chicago. She is the second woman in history who is elected as mayor of Chicago. Chicago is the third-largest city of the US where she is a leading lady.

6. Another history was made in the National spelling bee test. The Scripps National Spelling Bee was the most thrilling competition in history where there were 8 champions this year. This was the first time in 94 years when 8 kids became the champions and won the competition. They were named as Octa-Champs in the competition test.

7. Spike Lee made the history by winning the Oscar. He changed the cinema forever with his movie “Do The Right Things”. The film won the Oscar for best original screenplay.

8 . In April 2019 we got the first-ever glimpse of a Blackhole. This was the first time in history scientists were able to shoot a picture of a black hole. This was a huge moment in the history of capturing epic imagery.

9. Michelle Obama’s book made history as almost 10 million copies were sold. Her book name “Becoming” became the most successful memoir in history as her publisher reported in Bloomberg.

11. European Union Bans Single-Use Plastic. European Parliament passes the bill to reduce the plastic waste in oceans and seas. They completely ban the use of plastic plates, forks, and all other kinds of plastic utensils in Europe. These measures were taken to eliminate the plastics from our environment to confront the climate crises especially the marine litter is mostly plastic which is affecting the lives of sea species.

12. The Crown Act: The first time in history California became the first state to ban hair discrimination. California state assembly passed the ACT in April. According to the Act, it will be prohibited to enforce unfair hair grooming policies.

13. Little Archie Harrison Mountbatten-Windsor. This made history because of the special relationship between the UK and the USA. Prince Harry and Meghan Markle baby is probably the seventh in line cathedra in history.

14. Greta Thunberg made the headline in 2019 by protesting in front of the Swedish parliament. She is a Swedish environmental activist who regularly protested every Friday for climate change. Her dedication leads her to name as Times Person of the year in the Magazine.

Wrapping up the list here, I want to know about more events or major happenings which have made the history, do share with us in the comments section below.