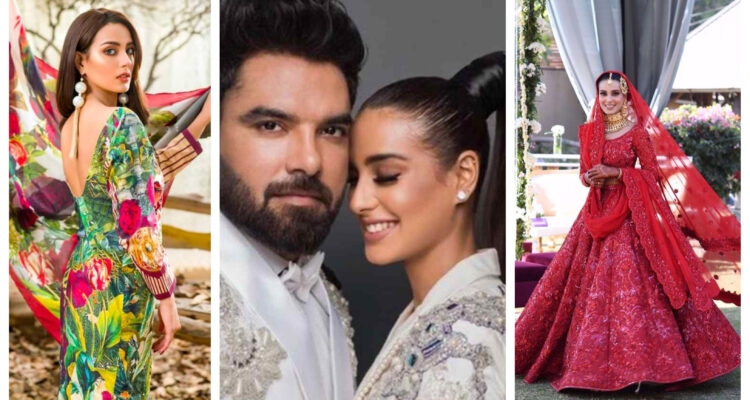 Connecting Pakistan on March 31, 2021 No Comments

Iqra Aziz is the most talented and youngest Pakistani television actress as well as a model. Her popular drama series are Ranjha Ranjha Kardi and Sonu Chanda. Iqra Aziz is one such actress who established herself as a talented actress in a short period of time and her good work has always been accepted by viewers and critics. Iqra Aziz is young, expressive, intelligent and she has been a part of some of the best dramas in the last few years.

Now She played the role of Mahi in the Pakistani best romantic drama series Khuda Aur Muhabbat 2021. She has also appeared as a guest on serials and talk shows. Her first guest appearance was in 2015 in Jago Pakistan Jago. On 28 December 2019, Iqra fell in love with Yasir Hussain and got married.

Farhad and Mahi come from very different economic and cultural backgrounds. Mahi, who belongs to an influential family, while Farhad hails from a small town. In this classic love story, two loving stars struggle to fight for their love.

Choti Si Zindagi is the best Pakistani romantic tv drama serial of Iqra Aziz that is premiered by hum tv on 27 September 2016. The drama story is written by Sarwat Nazir and produced by Momina Duraid. Its star casts are Iqra Aziz, Nimra Khan, Shehzad Sheikh, Rashid Farooqui and Farah Shah.

The drama story is based upon teen marriages is set in 1970s society. The short life was all about two young characters, who were forced into marriage according to family and social traditions. The story revolves around Arwa (Shehzad Sheikh), Amina (Iqra Aziz), and Azra (Nimrah Khan), and their twisted love stories.

Ranjha Ranjha Kardi is the most super hit Pakistani family tv drama serial of Iqra Aziz that is aired by hum tv on November 3, 2018. The drama story is written by Faiza Iftikhar and produced by Momina Duraid under the MD Productions banner. Its leading stars casts are Iqra Aziz, Imran Ashraf, Asma Abbas, Syed Jibran, Kashif Mehmood and Ammara Butt. The drama emerged as one of the most popular dramas in the history of Pakistani television.

Suno Chanda is one of the high rated Pakistani romantic and comedy-based Pakistani television drama series that is aired by Hum Tv on 17 May 2018. This drama is also broadcasted on PTV Home and ZEE5. The drama story is written by Saima Akram Chaudhary and produced by Momina Duraid under their MD Productions banner.

The series celebrates Pakistani wedding traditions by telling the story of a married couple who are not yet married, and the relationship between their families. The drama leading stars are Iqra Aziz, Farhan Saeed, Mashal Khan, Samina Ahmad, Sami Khan and Farhan Ali Agha.

The drama serial Kurban was another drama in which Iqra Aziz showed his talent as an excellent actress. The drama is aired by ARY Digital on November 20, 2017. Its story is written by Zafar Mairaj and produced by Abdullah Seja under Idream Entertainment production banner. Th drama leading stars cast are Iqra Aziz, Bilal Abbas Khan, Yashma Gill, Rehan Sheikh, Yashma Gill and Shehzad Sheikh.

Raqeeb Se is the best Pakistani romantic tv drama serial of Iqra Aziz that is aired on Hum TV. The drama story is written by Bee Gul and produced by Momina Duraid under their MD Productions banner. Its leading stars cast are Noman Ejaz, Iqra Aziz, Hadiqa Kiyani, Sania Saeed and Faryal Mehmood.